Anterior Cruciate Ligament (ACL) rupture is a commonly discussed injury due to its perceived severity and impact on knee function and quality of life. Recently, ACL reconstructive surgery has been on the rise in Australia, particularly within the younger population. Between 2000 and 2015, the annual incidence of reconstructive surgery increased by 43% (from 54.0 to 77.4 per 100 000 people), and by 74% among those under 25 years of age (from 52.6 to 91.4 per 100 000 people). Direct hospital costs of ACL reconstruction surgery in 2014–15 were estimated to be $142 million. The annual incidence of revision of previous ACL reconstructions increased by 5.6% per year, indicating a rise in follow up surgeries.

With this increase in surgical management since early 2000s, it has become worrying for physiotherapists to see a lack of understanding of the importance of exercise and rehabilitation in the management of the injury. Injury to the ACL commonly occurs in sports that require pivoting, change of direction, or sudden deceleration. In Australia, we commonly see these injuries in AFL, football, netball, Rugby among others.

It is important for the injured athlete to understand that if they decide to undergo reconstructive surgery as a form of management, rehabilitation is a lengthy process. Furthermore, if reconstructive surgery is indicated, patients will benefit from a pre-operative strength program which has been shown in literature to optimise postoperative outcomes and ability to return to sport over the long-term.

These exercises should be prescribed by a physiotherapist. This specificity in training is important pre-operatively as different patients will require training and exercises to target different aspects of the rehabilitation program. Areas commonly addressed with pre-operative management include establishing full joint range of movement, early motor control (how your brain coordinates movement) and strength (generally to a level beyond pre-injury level).

In the initial stages, it is important to reduce swelling and restore the bending and straightening range of movement of the knee. It is also important to restore quads strength to approximately 70% of the uninjured side. Once again, 70% is a hurdle, developing further quadricep strength is beneficial.

Once this has been achieved, further strengthening is needed with more complex exercises that do not aggravate knee symptoms. A 5-week program that incorporates strength, balance and plyometric exercises is recommended (see images below). In a study by Failla and colleagues (2016), a group of ACL injured patients went straight for surgery after their injury, whilst the other group commenced an exercise program twice weekly for 5 weeks under supervision prior to their reconstruction.

When they followed up each group at 2 years after the reconstruction, they found that those who did this 5 week program prior to surgery had significantly higher patient-reported knee function and quality of life. Furthermore, they had higher return to pre-injury level of sport rates compared to those that didn’t do the program.

Evidently, exercise is key both pre and post-operatively. But there are other aspects of an ACL injury to consider. One of the confounding issues in society is in response to the management of professional athletes. They have the luxuries of infinite resources and access to healthcare both preoperatively and postoperatively, which cannot be deemed, realistically, as the optimal way to address knee injuries across society. Considering that not everyone is a professional athlete, it is important to make a well-judged decision regarding

1. Whether to have surgery or not
2. How quickly to have surgery
3. What level of daily function a person is aiming to return to
4. Return to sport, which nowadays should involve objective criteria as opposed to time-based.
5. Other factors that influence the quality of life of a patient’s knee (ability to exercise, weight, etc)

Ultimately, whether you choose to have an ACL reconstruction or not, early management of symptoms is important for improving your long-term (2 years+) knee function and ability to return to sport. Therefore, there is no need to rush to surgery, and instead you will benefit from physiotherapy intervention which aims to strengthen the knee. Some of the exercises that could be included in your physio-prescribed program are shown below in the images.

If you have suffered an ACL injury and would like to be assessed by one of our physiotherapists, give us a call on 333 55 222 to discuss further. 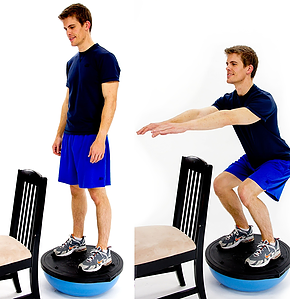